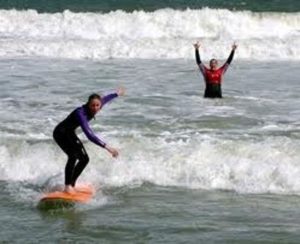 Lorry’s Island End Motel has 5 Great Surfing Beaches near Lorry’s. There are 15 LBI Surf Shops on the 18 miles of Long Beach Island. Lessons And Surf Board Rentals Available Nearby (All Ages). Surfers Can Walk To The Long Beach Island Forsythe Wildlife Preserve Beach Near Lorry’s Island End Motel. Surfers Can Walk To The Wildlife Preserve Beach Near Lorry’s Motel

Walk To The Nearby LBI Surfing Beach

Also, At The Beach Near Lorry’s LBI Motel are FREE amenities necessary to make your day go smoother such as:
1) Free 100 car parking lot right where you surf
2) 3 enclosed showers to change
3) Bathrooms for men & women
4) Bowker’s South Beach Grille & Deli to eat at the beach
5) A Handicap Ramp makes the LBI beach easier to access

Surf Board Rentals Are Available Near Lorry’s Motel
Bowker’s South Beach Grill nearby at the Beach has LBI surf board rentals available for Lorry’s Motel Guests to rent – and also they have bicycle rentals. We Look Forward To Helping You Have A Great LBI Surfing Vacation On Beautiful Long Beach Island. 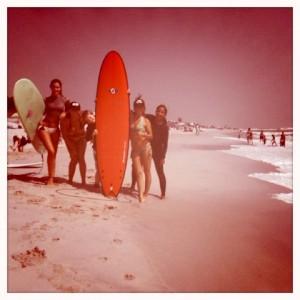 Nicole Has Stayed At Lorry’s Island End Motel
while teaching LBI Surf Clinics, so I know Nicole personally. Bill Hutson, Lorry’s Motel owner, says Nicole has a great following because she keeps her surf clinics small to be able to give personal attention to each surfer and does a great job.

Why Surf With Nicole ?
Surf with Nicole to get some of the best personal surf instruction you can find. Nicole has worked with hundreds of surfers around the world, including working with Las Olas the premier surf retreat for women. Nicole has been surfing for 12 years with 6 years competitive, and has been a professional surf instructor for 8 years.

Nicole teaches surfing year round working with Las Olas most of the winter in Mainland Mexico and California, then comes to Long Beach Island, New Jersey in the summers. Nicole also offers private customized surf packages for groups or family’s and will travel to you, anywhere in the world you may be or want to go.